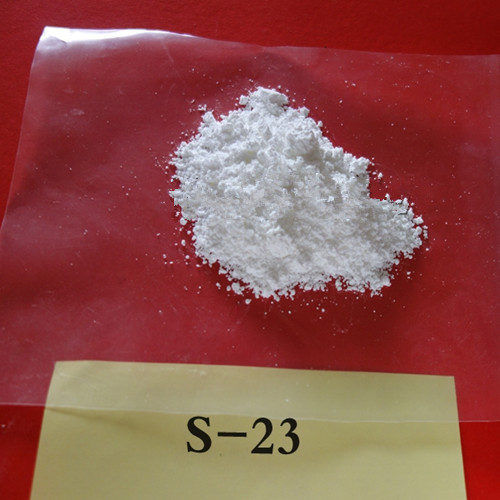 S-23 is an modern selective androgen receptor modulator (SARM) with the added interest in its potential for male hormonal contraceptive. It binds to the androgen receptor more strongly than older compounds such as Andarine with a Ki of 1.7nM, and in animal studies it showed both a good ratio of anabolic to androgenic effects, and dose-dependent suppression of spermatogenesis with spontaneous recovery after cessation of research.

Added value for research with pronounced suppression of spermatogenesis. Not for human consumption

S-23 not only boosted muscle mass, but also reduced fat mass, as studied. SARMs have a bit of a ‘soft’ image in the doping world. They don’t stimulate muscle growth in the way that anabolic steroids do, but many users say that they are safer.

There are no studies yet that confirm this suspicion. But that S23 is not one of the safer SARMs – we’d be willing to wager a bottle of BCAAs on that. S23 halts the production of sperm in the testes. In fact it does this so well that the researchers suspect S23 might be a good candidate for a male contraceptive. If this is the case it would probably have to be part of a cocktail that also contains an estradiol analogue, the researchers discovered. The lab animals lost their libido when they were given S23 on its own, and only recovered this when they were given estradiol benzoate together with the S23.

Many people want to know S-23’s safety before any action is made. Most of these SARMs have not yet been tested on humans, but only on rats or mice. This is also true for S23.

SARM 23 can be found in some webstores that sell research chemicals online. Not much is known about the working or side effects of SARMs in humans, so caution is advised. And a 2009 animal study, in which researchers at GTx tried S23 out on rats, suggests that S23 is a little more risky than other SARMS.

S-23 is new to the market, and no recommendation for dose is available. Data shows that a dose of 0.3 mg S23 [human equivalent: 15 mg] leads to an increase in muscle mass, but that the prostate dimensions decreased. But there is no official doses for S23 yet. We will update the dosing information when it is available.